Network of Teams: in redesigning organizations for the future, how does HR create the right environment for teams to win?

The traditional organisational design based on hierarchies is increasingly being displaced by teams regardless of industry, geography or company size. This shift is coming about as a response to today’s complex, uncertain and dynamic business environment. If we think about it, organisations are already structured in teams: sales team, marketing team, HR team, finance team, etc. What distinguishes high performing successful organisations from the rest (e.g. Google, Cisco, Alibaba) is that they have gone a step further to promoting teaming and networking as part of their strategy. 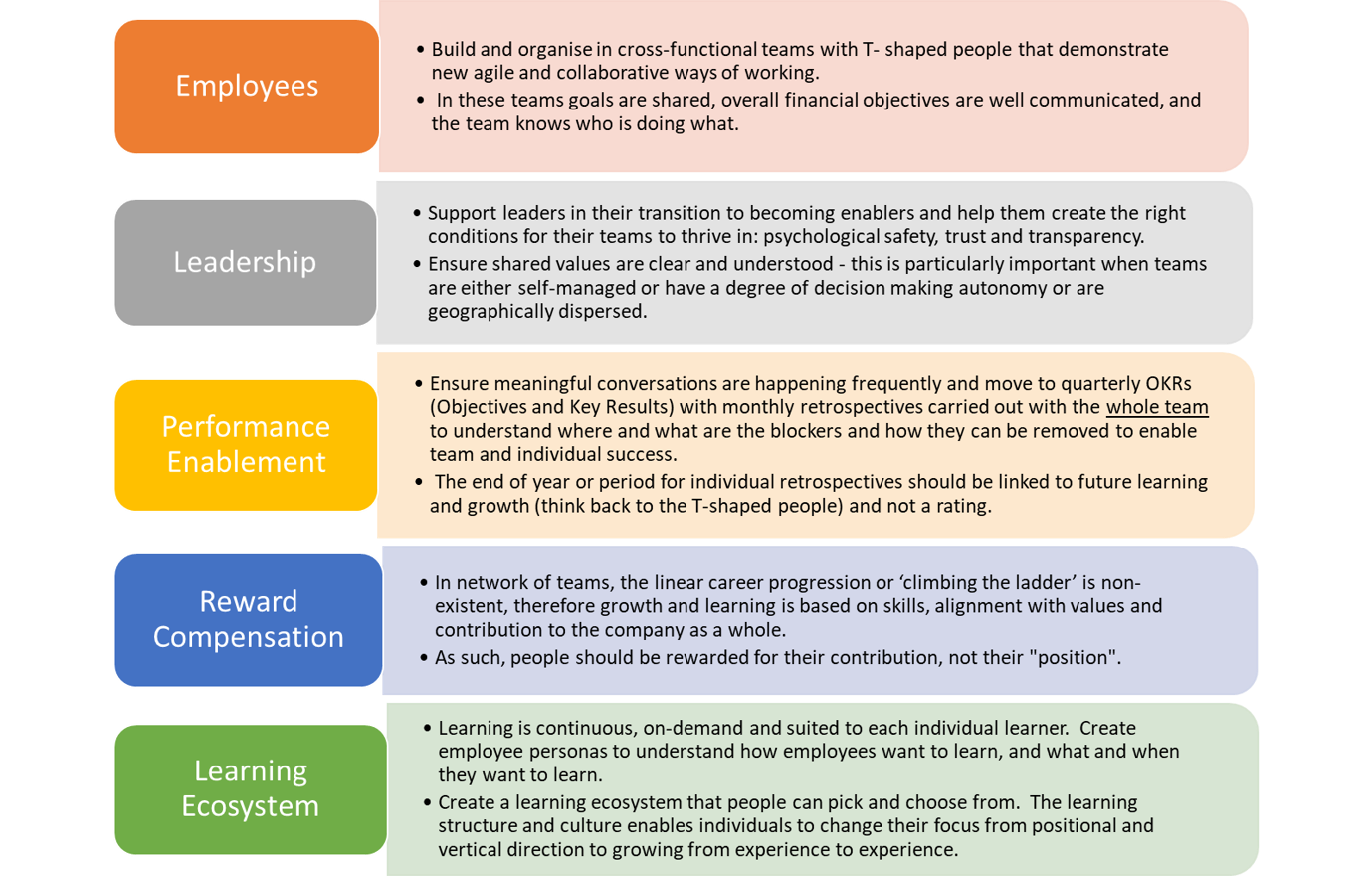 Networks of teams are the future

In Deloitte’s 2019 Global Human Capital Trends survey, sixty-five percent of respondents viewed the shift from “functional hierarchy to team-centric and network-based organizational models” as important or very important. Eight percent of the surveyed respondents now operate almost wholly in teams, with another 23 percent saying that most work is done in teams within a hierarchical framework. In addition, 53 percent stated that moving to a team-based organizational model significantly improves performance.

Transparency, collaboration and the free flow of information are at the core of the new team-centric organisation.

‘Collaboration is taking over the workplace. As business becomes increasingly global and cross-functional, silos are breaking down, connectivity is increasing and teamwork is seen as a key to organizational success. According to data we have collected over the past two decades, the time spent by managers and employees in collaborative activities has ballooned by 50% or more’ (Harvard Business Review).

We are moving away from work being organised around individual resources to being organised around a value flow or value stream. Organising work on an end-to-end collaboration empowers organisations to focus on delivering customer value faster - as team members are fully dedicated to that value stream - they are fully cross-functional, self-organising and self-correcting and moving in the same direction towards a shared goal.

Successful network of teams don’t operate in isolation, they are independent teams that are well integrated and interdependent with all of the organisation’s resources.

From I-shape to T-shape people

I-shape people have deep expertise in one thing (depth), whereas T shape people are experts in one thing but also have skills spread across other areas (breadth) and are referred to as ‘generalised specialists’. In agile teams, especially in Scrum, T-shape people are critical for success as it means the team has all the skills needed to get the work done with plenty of skills overlapping to reduce dependency on any one person. Work doesn’t stop when people are on holiday or unexpectedly off work. In addition, the work and the success of the team becomes a collective responsibility.

A new organisational design based on teams where work is organised around value flows with T-shaped people means that managing individuals and work is not just a matter of creating agile workplaces and scheduling stand-up and scrum meetings. There are many challenges to work through such as how we coordinate and align these teams, how we allocate budgets and reward people, how we train and grow people in companies where there is no longer an upward linear career path.

And, how do we cultivate greater collaboration in the C-suite, which is still not quite operating as an integrated team? But, that’s for a later discussion.

To begin with HR needs to promote cross-functional collaboration and empowered decision-making across the organisation and ensure practices and procedures are in alignment with this way of working:

Organisations of the future are going to primarily be organised around teams. This shift doesn’t happen overnight and in a true Agile way it should be an incremental journey co-created with employees, where decisions are continuously made and validated by them. This means continuously testing to see what works and what doesn’t, what can be scaled and what needs more work. The starting point should be to strive for a culture of collaboration, transparency and trust, where psychological safety will enable employees and the organisation to experiment, learn (maybe even fail a bit!) and adapt as they work toward becoming a true and successful team-based culture.